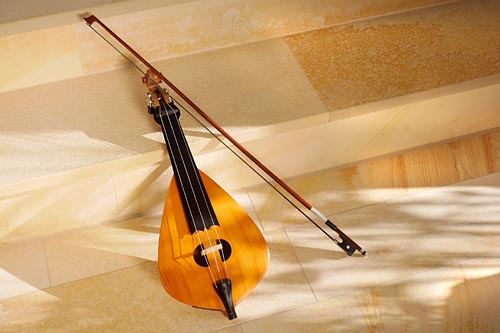 The lyra, which is widespread in Crete and the Mediterranean region, is a pear-shaped, three-stringed string instrument that, unlike the violin, is placed on the knee. Played in this way, it resembles a small mini-cello. Because of this playing position, the lyra is also called a knee violin.

Its 3 strings correspond to the 3 low strings of the violin and the sometimes unusually sonorous sound in the lower register is reminiscent of a husky male voice.

Instead of pressing down the strings as on the violin, the pitch is created with the fingernails touching the strings.

This playing technique is also common with other types of lyra found in the eastern Mediterranean and Balkan regions, as well as in North West India and other central Asian regions.

Along with the laouto and the bouzouki, the lyra is one of the traditional instruments of Cretan folklore.

The geographical location of Crete means influences from Europe, Africa and Asia.

The historical influences in chronological order were: Minoans, Dorians, Romans, Byzantines, Arabs, Venetians, Turks and the Cretan struggle for freedom..

The precursor of the Cretan lyra is the Byzantine lyra from the Middle Ages, which is the ancestor of most European stringed instruments.